Cooper is the creeper.  He's strolling through the forest when he stumbles upon something he's never seen before.  Hiding behind a tree, he witnesses this new "Monster" (Steve) kill a sheep.  Panicked, he runs to tell his friends what has happened.  He spurs his friends to gather together and investigate this "monster", eventually killing him. He adopted a cow in episode 4

Cooper has black round eyes with saggy eyelids at the bottom and white rings for eyes. He has no lips and unneat teeth. His body shape, unlike the normal Creeper his body is not perfectly square and more baggy. He has long legs.

Cooper is flighty and cowardly, he often flees from "dangerous situations", such as watching Camerons's house. He is also known to make a storm in a teacup like when Nigel askes him to poop. Cooper also shows disgust towards vile language, though he uses it himself. Despite the lack of lips he can still pronunce his Bs, Ms and Ps. He hates black magic.

Being watched whilst pooping

Cooper on his Daily stroll

Cooper on a ledge with his Baby Cow 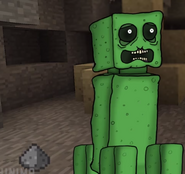 Cooper Pooping
Add a photo to this gallery

Retrieved from "https://mob-squad.fandom.com/wiki/Cooper?oldid=5469"
Community content is available under CC-BY-SA unless otherwise noted.